I was hoping to cut out the VM cross compiling and copy step. I know the PI is slow, but the Linux VM is even slower under OSX.

Thanks for the very quick reply.

Some of us are using a VM under macOS, even myself before switching to a native Linux computer one year ago… it’s slower than the host but not too much and still way faster than building on the Pi, unless you have a very old Mac.

Also, you can use literally any Linux VM image for this, you don’t need audio nor even a graphical desktop. The performance bottleneck is usually just disk access which is slower on the VM.

We have on our list to dockerize the Yocto cross-compilng toolchain, in that way it will be possible to run it directly from a macOS terminal.

So together with the partial release on Github of docs & SDK, we prepared some instructions to run the toolchain on macOS with Docker.

@Dauq, I guess this should target your use case as well.

The only difference compared with a VM environment is that you won’t be able to run the Projucer inside it, unless you modify the Docker containers to set up an X11 server etc. At the moment, you will have to manually edited the generated Linux Makefile and change the paths to the global JUCE modules and VST 2.x SDK so that they refer to directories in the Docker volume.

Any reason not bind to a docker mount of a local directory in place of samba?

HI @Dauq,
I’m not so expert in Docker. Just to be sure that I understand your question, if what you want is can I install the toolchain on a macOS local directory mounted through Docker?

then, the answer is probably NO. The toolchain needs a Linux-like filesystem for stuff like case-sensitive, symbolic links, etc.

But probably you can use osxfs instead of Samba, it might be more efficient.

Samba isn’t working for me (can’t go to it in the Finder and have tried all the workarounds).

Use of OSXFS is working!

I created the CaseSensitive volume via Disk Utility: 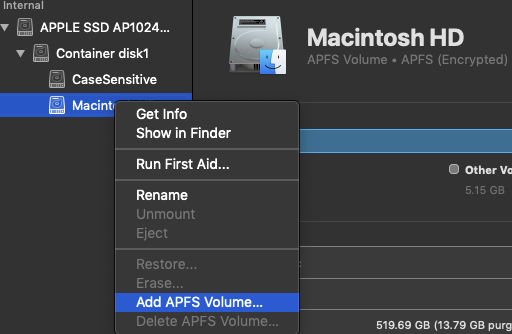 FYI, Samba just didn’t work in Mojave (OSX would not let me see it even with workarounds for ip alias, etc). And mounting a non-case sensitive volume failed with errors while trying to extract the SDK. (which is a shame because it’s pretty easy and a good idea to avoid case sensitivity in apps)

@Stefano Do you want me to submit a PR to update the docker instructions in https://github.com/elk-audio/elkpi-sdk … or do you want to copy/paste the above.

If PR, let me know if you want to give me commit access to a dev branch or if you want me to fork.

P.S. The install of the SDK in docker is pretty slow and is still running (last message “Setting it up…”). Even the extraction was pretty slow.

The sdk build is done.

The following message is a bit odd:

The build of ProJucer failed. Did I miss a step in the config? This and the arch issue suggest that…

Hi @Dauq,
are you following the instructions in the doc here:

This file has been truncated. show original

It seems to me that both errors you are experiencing should not be there if you used the suggested make invocation that address exactly those two problems, i.e. you should run:

instead of simply make. Of course you can prepare a script to wrap this and anything else.

The ARCH is correctly set in the SDK, the problem is in the Makefile generated by Projucer. That TARGET_ARCH is a Projucer variable, nothing that is standard system-wide. If it is not set, by default JUCE Makefiles set it to native, that’s why you have to override it.

Not very expert with Docker to answer you on this, maybe you can look at the CROPS eSDK Dockerfiles and you will find info about the password?

You can run Projucer on native, and then cross-compile. The only issue is that some of the path generated on the Makefile by Projucer will not be correct, so you’ll have to manually fix the generated Makefile (or prepare e.g. a sed script or similar).

Still, you shouldn’t get that ft2build.h missing… we are on our way to the ADC conference so it will be hard to answer the following days, I’ll take a look as soon as we are back next week.

Hi @Dauq,
reviving this thread since @frederic was working on a similar setup and found what the issue was.

It seems related with the pkg-config installation in Docker, weird but in this context the proper paths are not returned. The workaround, quoting verbatim Frederic, is:

Hi,
About the password issue I was not able to find info about it, but I could modify the Dockerfile of the base image of the cross-compilation toolchain (https://github.com/crops/extsdk-container) to give root permissions (without password) to the sdkuser. You just need to add this line to the sudoers.usersetup file in the repo:

Then you rebuild the image and use that one for running the cross-compilation toolchain.

This will allow you to install dependencies and to whatever you want to do inside the running docker container, but in fact this was useless to me because it is still complicated to actually install dependencies for the arm subsystem in the docker image which is the one used for the cross compilation. As @Stefano reported above, I fixed the dependency issue by adding an extra include path in the makefile generated by Projucer.

Here I add a few references for Linux.

I did a fresh install today with using a VirtualBox image from osboxes as suggested on Get started with the Elk Software Development Kit!.

Then instead of going one by one, I installed the remaining dependencies as shown in this post:

Then, compiling JUCE from the headless_plugin_client_next branch using the Linux Makefile in JUCE/extras/Projucer/Builds/LinuxMakefile with
make CXX=clang++ -j4 worked well.

After working on my VST on JUCE as usual, I downloaded the SDK referred here and added -I/home/osboxes/VST3_SDK/ to Extra Compiler Flags on the exporter.

The output file was automatically created in this location:

To build sushi, I installed a few more dependencies on the VM.